A visit to an ice hotel isn’t exactly the first choice if you prefer to spend your holidays under palm trees in warmer climes. But if you can manage to overcome your fear of freezing, you’ll be rewarded with a unique natural experience. Visitors to this hotel spend the night amid ice and snow around 200 kilometers (about 125 miles) north of the Arctic Circle, in the Swedish locality of Jukkasjärvi.

Ice-cold experience: A night in the Icehotel

DW reporter Hendrik Welling found out what that feels like. For the “Europe to the Maxx” in DW’s magazine “Euromaxx,” he regularly explores places in Europe that hold a record all their own. He traveled to Europe’s oldest ice hotel in Sweden. Even the journey by snowmobile through the frozen landscape was a bit of an adventure. Find out how he experienced the night in sub-zero temperatures ― and whether he was lucky enough to see the famous northern lights ― in the video.

From art gallery to hotel

Everything began in 1989, with an exhibition of ice art. A large igloo was created as an exhibition space for the cold creations. A short time later people wanted to spend the night in the icy atmosphere, and thus the idea of an ice hotel was born. The project grew bigger and bigger, but the artistic approach remained.

Ice sculptures are omnipresent in and around the Icehotel

The Icehotel is today not only the oldest establishment of its kind, but also kind of a huge art gallery. Every room has its own motto. Artists from all around the world transform the frosty bed chambers into elaborately designed suites with ice sculptures and other creative details ― every winter anew. 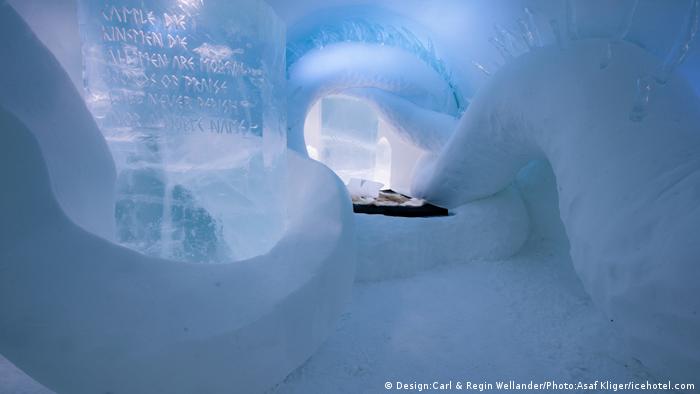 The work begins in October, when the temperatures in Jukkasjärvi drop ever lower. The “building material” for the unusual hotel comes from the frozen river Torne, with extremely heavy blocks of ice used in the construction. Mixed with snow, they become Icehotel’s walls, beds and sculptures.

A whole world made of ice 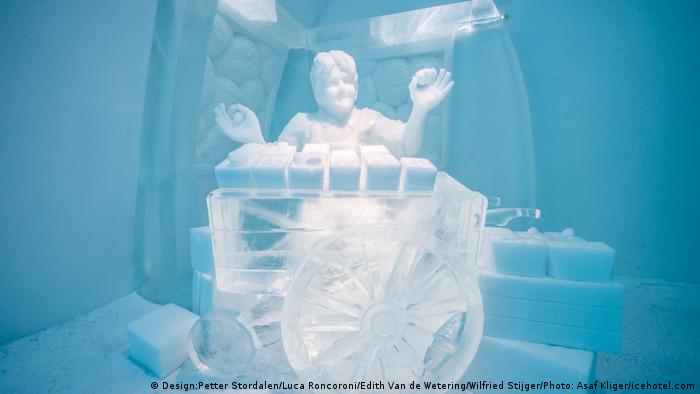 Would you like something cold? This snow vendor at the Icehotel only has frozen food on offer.

Alongside the actual hotel rooms, a hotel lobby, a bar and a church are also made this way. Like in a classic igloo, the dome-shaped structures are self-supporting. The thick walls of ice and snow insulate the rooms. As a result, even if the temperatures outside sink to -30°C (-22°F), it stays at minus five inside – small mercies! In order for them to weather the night in this ice-cold setting in relative comfort, visitors are given especially warm sleeping bags. And for those who are still cold, there’s always the house recipe for warming you up: a hot glass of cranberry juice.

Getting there: Train or plane to Kiruna, then to the hotel by bus, taxi, snowmobile or dogsled

Hours: December-April; an off shoot, Icehotel 365, is open all year round ― cooled by energy generated via solar panels in the roof

Special tip: Observe the Northern Lights near Jukkasjärvi on a dogsled tour

Europe at its most extreme: the series “Europe to the Maxx” in DW’s lifestyle and culture magazine “Euromaxx” makes Europe’s superlatives experienceable ― from extraordinary architecture and spectacular landscapes to unique cultural phenomena. Accompanying the series, the book “111 extreme places in Europe that you shouldn’t miss” was published in cooperation with Emons Verlag. You can order the book here. An alternative travel guide, both informative and entertaining. For avid travellers, fans of Europe and anyone who likes to show off with unusual pub quiz trivia. Full of guaranteed record breakers!